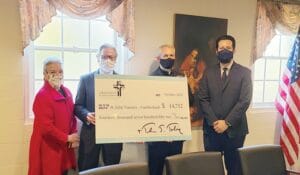 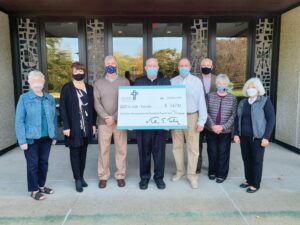 Article from The Rhode Island Catholic (link to article below)

BY BRIAN FRAGA, RHODE ISLAND CATHOLIC CORRESPONDENT
CUMBERLAND — Michael Woody and his wife, Joanne Speroni-Woody, were set to give a parish presentation on the Grateful for God’s Providence Campaign last winter. When they walked into St. John Vianney Church for Mass, they saw a green bucket on the altar, catching rainwater.
“Father Joe pointed it out and said, ‘This is not an Advent decoration,’” Joanne said, referring to her pastor, Father Joseph Pescatello.

The stopgap solution to a leaky roof illustrated the parish’s capital needs, and the congregation responded. Parishioners pledged a total of $995,749, which exceeded the parish’s goal of $762,381.
“The response was overwhelming,” Father Pescatello said Oct. 19 as Tim McCaig, the director of Stewardship and Development for the Diocese of Providence, presented him and the parish’s capital campaign committee with a ceremonial rebate check for $14,752.

“I remember saying to Joanne and Mike before we started, ‘I don’t know, this is a steep goal,’” Father Pescatello said. “They gave me a thumbs up and said, ‘We’re gonna do it.’”

That can-do attitude could describe the diocesan-wide approach to the Grateful for God’s Providence Campaign, which is an initiative to commemorate the Diocese of Providence’s 150th anniversary in 2022 by raising $50 million to support the Church’s mission at the diocesan and parish levels.

“Despite a challenging year for so many, our generous donors have continued their pledge payments, and we are so grateful for their commitment to this historic effort,” said McCaig, who added that $30 million has been paid into the campaign thus far.

“And close to $9 million has (been) returned to parishes for their own projects, repairs and outreach services,” McCaig said.

Each parish has a campaign goal, and receives back 40 percent of money that is collected toward that goal. Of any money that is collected over that amount, the parish will receive 60 percent.
At St. Jude Church in Lincoln, McCaig in mid-October also presented a ceremonial rebate check of $14,742 to Father Bernard C. Lavin, the pastor, and members of the parish’s capital campaign committee.

“This is the most generous parish,” Father Lavin said. “The people here are always so kind. Whenever there is something presented as a need, they always respond to the best of their ability, for anything we’ve ever asked them to do. We’re a very generous community.”

Of the Grateful for God’s Providence Campaign’s original $50 million goal, $30 million is earmarked for the diocese:
∙ $8 million for an endowment for seminarian education
∙ $8 million for an endowment to support retired priests
∙ $5 million for an endowment to benefit Catholic school tuition assistance
∙ $5 million to bolster the Catholic Charities and Social Services endowment and operations
∙ $4 million to help pay for renovations to the Cathedral of SS. Peter and Paul
The remaining $20 million in campaign funds returns to the parishes for their own projects, which in many cases include long-needed renovations to church buildings, parish halls, parking lots, and new equipment for ministries. At St. John Vianney Church, the rebate money will help pay for capital improvements and a new laser projection system.

Father Pescatello said the money received from the campaign will also help the St. John Vianney Help for the Needy, a parish ministry that provides assistance with rent, heat, food, medical bills, shelter and clothing.

“We have a good committee to reach out to those in need, and people respond very well to that,” Father Pescatello said. “This will provide backup money for those kinds of things as well.”
At St. Jude Church in Lincoln, the rebate money will not only be used to begin renovating the parish center, bathrooms and air conditioning, but also to provide funds for the meals and materials that parish volunteers frequently donate to the diocesan Emmanuel House overflow homeless shelter in Providence.

In addition, the funds will help the parish’s efforts to support the Knights of Columbus’ local food pantry. Father Lavin said the parish has already dedicated $2,500, including the September proceeds from its poor boxes, to the Knights’ food pantry.

The Grateful for God’s Providence Campaign has been established as a separate corporation. The monies raised through the Grateful for God’s Providence Campaign are restricted from being reallocated to fund lawsuits, settlements or any other areas. These campaign contributions will go directly to fund the case elements presented and campaign expenses.