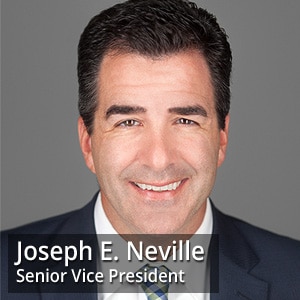 Joe Neville, a Maryland native, currently resides in Windermere, FL and joined Guidance In Giving in 2000. Over the last fifteen years, he has been involved in conducting a wide array of development efforts throughout the United States in arch/dioceses, parishes and Catholic high schools (including capital campaigns, planning studies, annual appeals, development audits, etc.). He has been involved with Catholic projects in Alabama, Arkansas, California, Florida, Georgia, Maryland, Missouri, North Carolina, Ohio, Pennsylvania, Texas, Virginia, Washington, and West Virginia. For the past eight years, Joe has focused his efforts in sales, supervision and operations of development efforts in Catholic parishes and dioceses throughout the Mid Atlantic and Southeastern United States.

He and his wife Kristy were married in 2004 and have two children, Evan and Claire. Joe serves as coach for his son’s baseball and football teams.